A downloadable game for Windows and macOS

You're in a desert occupied by people who dig holes.

Unfinished with "To be continued..." just before it should get more interesting.  This small and barren "world" is a bit punishing to navigate... on purpose (even with the "Always Dash" feature on).  And, yes, the map is too big and I should make it smaller.

With only 17 hours of work, I almost finished the first part of what was intended to be a three-part short story/adventure.  This leaves the question: Should I continue the story?

had to chmod +x the inner executable (nwjs) in the osx version (see this). after that, on osx 10.14.6 it would start up but not create a content window or do anything afaik. cool game image, though. the 'warn before quitting' option also failed to cause a dialog box to pop up when quitting

Thank you for the report.  As I recall, the macos build was just a hail-mary test of RPG Maker MV's mac export.  Given the obvious +x problem, I surely didn't test it during the game jam and never found time to come back to it.  I'll see if I can build from my second-hand mac mini and see where that goes.  Or, maybe just go for HTML5.  Don't recall why I didn't.

The macos version has been fixed.  The difficulty of cranking out dialog in RPG Maker in this test inspired me to later write my own dialog tool for RPG Maker.  I use it in another game I have yet to release.  But, should I bother, it should make finishing this story much easier.

Alright, I finished Dig. And then dug through the code. Made sure I didn't miss any key-bindings, etc. Never figured out if [pg up, pg down / Q, W] did anything, nor the tab button. They all had bindings, but didn't seem to have any effects. I liked the Donald, although the dialog with Danny was the richest. Interesting to see that the NWJS framework added a whopping 500Mb, whereas the main app files were only 70Mb, most of that audio and lots of unused visuals. Fun seeing the japanese in some of the core rpgmaker files

You raise a fair point that I should list the relevant controls.  Done.  (PageUp/Q and PageDn/W are listed as prev and next page -- and can only guess that is in case a menu or dialog runs over to the point that arrows keys aren't enough -- which doesn't happen in Dig.)  Yeah, I'm more interested in writing the game then peaking under the hood of the game engine.  (And, as you know, the last time I did that I ended up rewrite the engine [now, Pogo Game Engine]... so, probably best not to go there again... especially during a game jam.)  But, I was wondering why the Mac build was twice the size of Windows.  Windows doesn't use NW.js but has a nw.dll instead.  Looks like a cop out on the Mac.

RMMV does have a build option to not include unused assets, but it's not very good at it.  Probably because the default rigging references a lot of assets and I would need extra time to go clean all that out (or just whack the asset files I don't recognize).  Not a high priority in a game jam.

I am amused by the meta situation that because Dig wasn't deep enough for you yet, you found another way to dig deeper.

Yeah, Donald is fun and an easy personality to write for (plenty of source material there).  And, yes, Danny is the main character you interact with, and the one that moves the story along.  He sends you off on small errands or tasks to do.  The current content ends just before the first of those.

Anyhow, this was a test of working with long-form and branching dialog in RMMV -- neither of which it does very well.  I spent the first 16 hours testing map sizes, trying to figure out how to make large holes in the terrain (not easy -- the rocks around the oasis is a side effect of that), playing with the character generator, loading plugins for richer text and whatnot, and stress testing the dialog system, etc.  Thus, that left only about an hour of content writing with a difficult dialog tool.

But... as mentioned before, it did inspire me to then write my own dialog parser in JS where I can write an entire branching conversation into a single string with very simple markup for branching and avatar expression.  I even wrote a syntax hiliter for it.  Thus, I should be able to get much further much quicker next time. 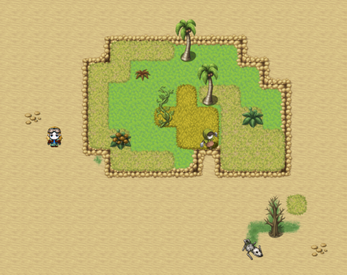