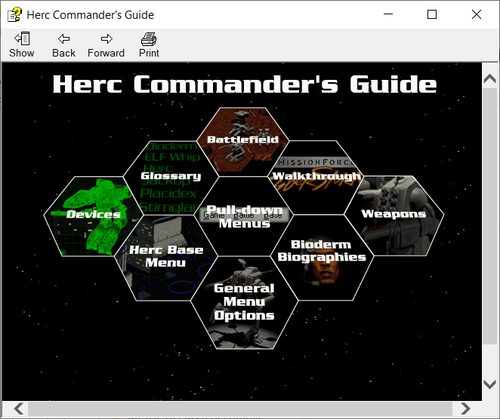 After 6 months of teasing the world that I could do it...

The old 16-bit MVB help files for the manuals have been recompiled into the much-more-modern HTML help format (CHM, which, technically, is now also outdated but should also be supported in the foreseeable future). 😱  All three languages are included.  It took a lot of tool writing plus mashing up with a variety of existing tools.  The process is very loosely documented in the repo files on GitHub.

The conversion is near-perfect, but not perfect.  Getting the final bit of perfection would have required maybe twice the work.  Not worth it for the few edge cases where lines don't break properly in tables and such.

On the bright side, you now can zoom in (like with any other HTML browser) and access other modern help features.  I also rebuilt the hot-spot maps for the heck of it so that the hexagon menus now have matching hexagon hot spots (instead of an approximate mash of three or so rectangles in the original).

The supplied MVIEWER2.EXE merely translates the old context-sensitive calls to the equivalent call in the CHM load.  It is just a DOS batch file converted to an EXE.  The source is in the repo.

Users who were on release 6 can skip the patch install and just unzip the MANUAL folder and use that to replace their current MANUAL folder.

Get MissionForce: CyberStorm - patch for Win7+